Did you know that the number of pensioners who injure themselves while doing extreme sports has tripled in the past three years in the UK? Who would have guessed that people older than 50 would dare to practice scuba diving, mountaineering or surfing? However, this is the truth. In fact, many insurers and adventure specialists are reporting a significant rise in injuries. Some of these injuries are severe, and there are even cases of deaths among the retirees partaking in dangerous sports.

According to the Maritime and Coastguard Agency (MCA), more than a third of the people who participated in British scuba diving incidents in 2009 were more than 50 years old. Also, the number of incidents together with the proportion of victims over 50 has increased iso much compared to a few previous years. “There has been an abnormally high number of injuries and fatalities among the over-50s this year,“ said the safety adviser for the British Sub Aqua Club Brian Cumming. According to The Independent,   “It’s not unique to diving; all activity sports are seeing similar problems. Typically it’s a heart attack or a stroke.”

The older the sportsmen, the higher the risks

The Director of Sport at Perkins Slade, the company that insured the British Mountaineering Council and British Aqua Club, had this to say,

“We’ve seen a big increase in the number of older people in accidents – there was a time when the over 70s made up as little as 2 percent of our claims. There’s no doubt that the statistical evidence is there that the older you are the more risk you present. I think the population is genuinely getting fitter and healthier, but after 70 we’ve got statistics which show that the incidence of accidents increases sharply.”

Tom Harrison is over 70 and likes extreme sports (at least, he was seven years ago when this article was published). He was ready to accept the accidents that came with it. Tom liked adventures generally, but once while mountain biking he ended up with a broken rib. Still, he said: “I’ve had my fair share of accidents. I managed to come off my bike backward and hit a tree not long ago. Then I broke a rib, so that was pretty painful, but it’s all fun.” He had some other accidents also: “I do a lot of fell-running and marathons. I crashed over doing sprint training in the dark, cut open my head and had to have five stitches. Just three months later I was back in A&E having done the same thing. They reminded me I didn’t get a volume discount.”

This man was (and maybe still is) unstoppable. He was not afraid and would continue with his dangerous adventures.

“As you get older your balance isn’t the same when you go downhill. So when it’s a grassy slope, you slow down a bit, but I’m not going to stop running. I belong to a fell-running club so I still go all the time. I’m very creaky and arthritic, but otherwise fine and I’ve raised over £10,000 in 10 years for Help the Aged doing all these things. I have stopped running at night on rough ground as my eyesight has deteriorated a bit, but it hasn’t occurred to me to give up. I’m running in the London Marathon.” 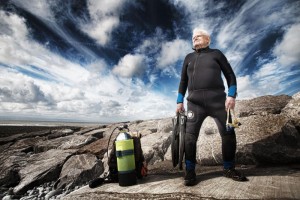 The national scuba diving officer said that old people who want to take part in high-risk sports such as diving should do some adequate health checks first.

“In general, the population are living longer, are fitter and have more disposable income. Therefore, it is no surprise that we are diving longer into retirement age. But this does bring some risks, and divers should be aware they are not invulnerable, and a health check would be advisable.

Dr. David Spiegelhalte is risk statistician at Cambridge University. He is also a and a keen mountaineer. Spiegelhalte said that the increase in these incidents should not scare people who want to be adventurous when they get older. He stated: “I’m 56 and I’ve just booked my third 20,000ft peak this summer. I think it’s entirely rational for people to do more dangerous things as they get older. Your natural background risk of dying is greater anyway, and you’ve done your bit, so why not go out in glory?”

Would you practice scuba diving, mountaineering or surfing in your 70s?